Just before the festive period, the Cameroonian community at home and abroad set the social network giant Face book ablaze. In fact, if anger and words could burn, its heat could have been felt for days. This was brought about by what they all considered to be a blatant disregard for people’s feelings and abuse of power.

It was rumoured that staffs of the Buea Council had to ditch work to be in Douala airport to welcome the mayor’s wife and son from the United States. Sociological Studies show that when it comes to politics, rumours always usually have some grain of truth in them. Therefore, pundits held that these rumours, clamoured with the fact that the Mayor was said to have abused his power and tax payers money to fund the whole trip had grains of truth. What further gave credence to these rumours was the fact that soon as the outrage started over pictures posted on the Council’s Face book page, they were all taken down.

And thus the questions began. Why did the pictures disappear if it was all funded from the Mayor’s private coffers? Why did the workers ditch work to go welcome his wife and baby?  Why a foreign hospital? At a time when many are frustrated with the state of affairs of the country, this act was seen as a slap in the face, a deliberated act of slowly rubbing it in were it pains on people, the abuse and oppressive use of power and still flaunting it.

Well, the people decried the situation and the pictures went down. The power of social media and a collective voice united for the common good could not be ignored.

The festive period came and it appeared everyone must have forgotten and carried on with life. After all, it is the period said to be merry, a time for love and reconciliation. Apparently, Big Brother has been watching and bidding his time and a few months later, Mr. Mayor and the Buea Council ghost appears in the news again. 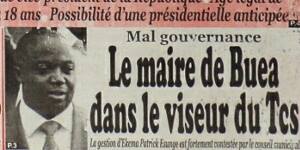 He has continued to be on the news. Sadly, it seems to be one scandal after the other.His appointment at first was greeted with a lot of optimism especially as, he took over from a young and dynamic leader. Ironically, the people’s expectations that a younger replacement would follow in the footsteps of his predecessor and accomplish even more has been completely dashed. The new Lord Mayor seems to have thoroughly gone the opposite direction from his mentor, leaving instead a legacy of scandal, extravagance, reign of terror and oppression of the masses.

This is a sad result of individuals using the loopholes in a struggling system for their own selfish interest, where many are blinded by material gain than service to the people they promised to serve. They act like patched grounds hungry for rain or hungry lions who couldn’t bear the sight of meat and so they devour before they could sample it. And thus, the outcries continue. The events of the past few months have shown that, social media is fast becoming a voice through which the voiceless masses can be heard and if put to good use, can be a force for change.

Like I said, Big Brother is watching. The older generation seem to have completely failed us and sadly, the younger ones represented by the Lord Mayor of Buea are proving to be worst than them. Where then do we hope for change when youths as future leaders seem to act worst? Social Media?

I remember those pictures… they were ridiculous! Social media is so powerful these days. I think the power of social media is surpassing that of mainstream media. Indeed Big Brother is watching. If we could live our lives being conscious that He is watching, it will make a whole lot of difference. Nice read!

You can say that again my dear. The Pictures were a wa. The power of social media over mainstream media can not be over emphasised. I so agree with your last statement. Thank you so much for the constant support. E-hugs

And the….Mirror, mirroron the wall, is my Tummy large?….
Answer……Not only isyour tummy exptremely large, there is an almost naked lady lurking behind”
All say ‘cheeeezzzz”

What’s up, I check your new stuff regularly. Your story-telling
style is witty, keep up the good work!

Feel free to surf to my weblog: shopping blog: http://www.surucuturizm.com/index.php/component/k2/itemlist/user/2986