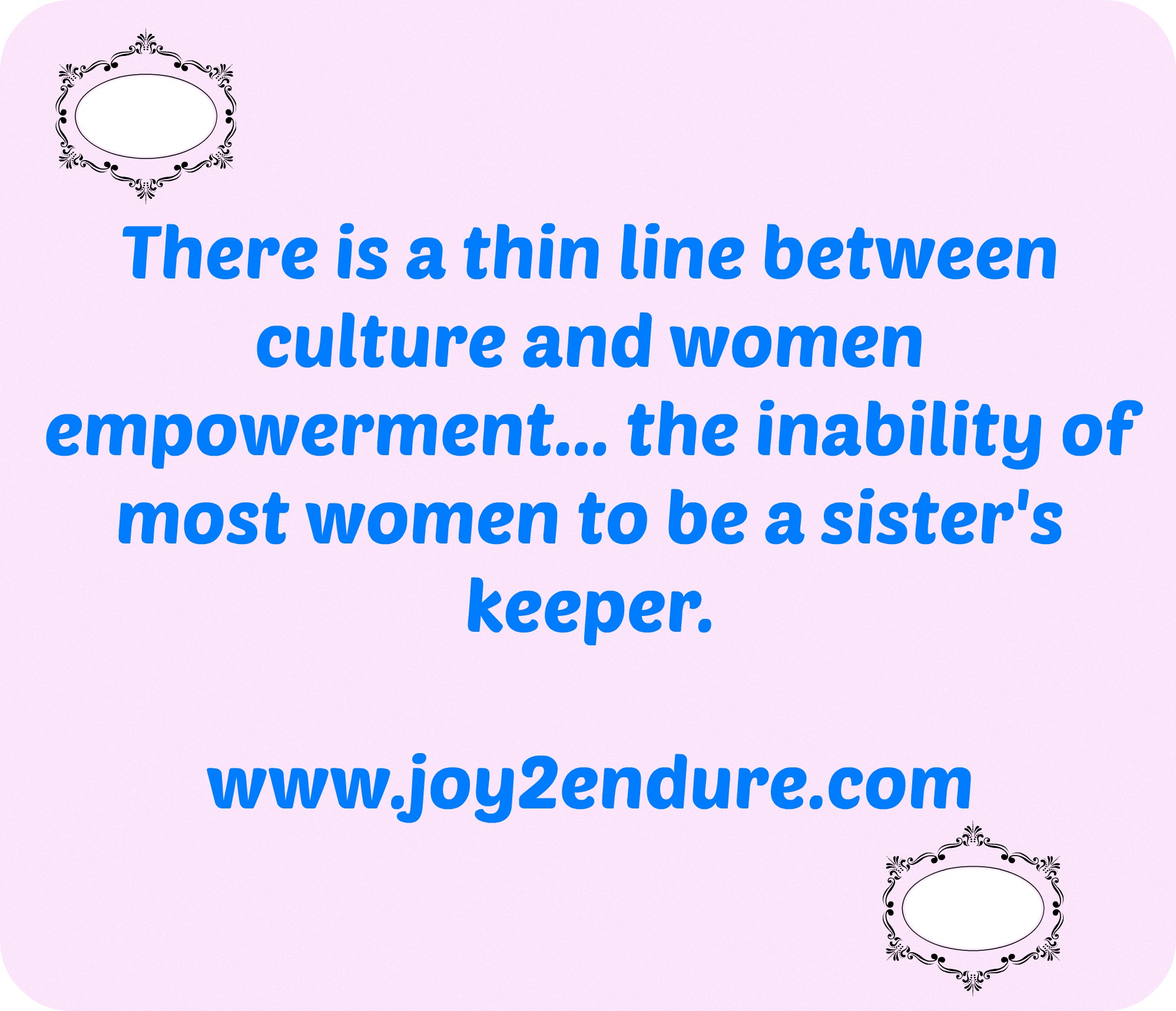 ‘Woman thy name is woe. If you are not receiving it, you are dishing it out’.

This is my favourite line when I come across an article or anything pertaining to what women in general face at the hands of not only men, but especially women themselves. Those kinds of articles that makes one speechless and all I could say is ‘Chei! Woman thy name is woe!’ You don’t understand me?

I watched a show recently and a man and his wife are having their couple time. Wifey is heavily pregnant and hubby decides to cook for them. Very thoughtful and gentlemanly I mused. The sister who came to visit that fateful day didn’t see it so. She felt her brother was pampering the wife and was fast becoming the ‘woman’ of the family because he decided to cook and serve his pregnant wife.

For the sister, if their mother could do it time and again with numerous pregnancies even pounding Achu and Ebha (Fufu), go to the farm, you name it, she sees nothing wrong with the sister-in-law doing same. Long story short, an argument ensued and the sister was hauled out of the house. Why did I like this story? For one thing, I loved the way the husband stood by his wife and they both showed a united front … their family, their rules… make society wait first!. For another thing, it set my thoughts rolling. I couldn’t help thinking how in the kingdom of womendom, women are their own worst enemies. Why do I think so?

We decry the societal yoke wrapped around women’s necks, constantly weighing them down. We are quick to blame the men and cry foul because we live in a patriarchal culture and rightly so. Every law and custom seems to favour the man and male child. Every law and every action is considered from the man’s point of view. Nevertheless, women are not held at gunpoint or threat of life or whatever to see these rules and regulations get implemented. Or are they? One thing I know, if women collectively stand united, many of society’s evil against them woulddie. Why do I say so?

Let’s consider the case of domestic violence. Many women remain trapped in abusive and loveless relationships because most of the time, they have nowhere to go. Their fellow women who could have rallied to help them get out of the hellish holes of a marriage are usually the first to tell them ‘just tie heart go back for ya mansa ee haus na so marriet de’. For real? I have always believed though marriage is made up of two imperfect individuals, they were meant to love and cherish each other even in their imperfections. And when a woman successfully escapes death by leaving an abusive relationship, she’s mocked at, considered a failure and blamed for the sad state of her matrimonial home. And this is most often done by women. ‘You sure say you no be di do so and so fo provoke ya mansa make ee beat you?’ Man as usual, gets validated because society has conditioned it so; he is never wrong. What ever happened is the woman’s fault. And women feed this with their inability to sympathise and unify with their sisters.

Cultural practices are said to have been institutionalised by men. Still women are the forerunners in their implementation. Women are the ones who cut open other girls in their twisted notion of ‘preserving’ the girls’ morality and purity when it comes to female genital mutilation. (FGM). Women are the ones who eagerly pound girls’ breasts, what we know as breast ironing, trying to delay the development of the girl. I say them di pound am like fufu witi mortar pistle. Instead of trying to teach their sons on how to control their lust and treat women with respect, they feel the girl is the one who needs to be reined in to avoid tempting men. The same goes for rape victims. Most often than not, the victim is blamed for inciting the man.

Women are the ones who dress their underage daughters and sell them off to marry men old enough to be their great grand fathers to pay off family debts. Yes, maybe some mothers are helpless, but the lack of unity amongst women makes the practice go on. A mother who dares to refuse is opposed by other women and considered an upstart, a betrayal of social values. Similarly, widowhood rites are inflicted by women on their sisters. One would think for someone who passed through such a barbaric custom, women would be eager to protect their newly widowed sisters from going through the same agonising road. Wosai! Na dem di run fo go broke bottrole fo come shiney head! It is like they say, ‘I passed through this I am waiting for the next victim to revenge it must not end with me.’ Women are the ones quick to inflict pain after child birth on another woman with the custom of using hot scaling water and loincloth aka wrapper on women in a bid to help the stomach reshape.

At the jobsites, most often than not, women are the ones who hoard knowledge, maltreat their female colleagues especially if they are at thetop. They are the ones who maltreat their domestic workers and on Social Media, cyber bullying is carried out mostly by women and against women. Women are alwaystoo quick to put down and condemn their fellow women daring to be different, daring to challenge existing status quo. Of course, there are times when some women go overboard with the feminist and men bashing movement. This group of feminists fail to see that being a feminist does not equal repeated man bashing.

However, there are many women embracing the need for a united front, for sisterhood. These women have gone out of their way to be a sister’s keeper come what may. I applaud such women and organisations like World Pulse, which is providing that sure network of support round the clock for women everywhere. Nevertheless, for as long as majority of women stay divided, continue to inflict pain upon other women in the name of culture and fight amongst themselves, women will remain their own worst enemies and their name will always be woe!

I kept nodding as I read this write-up. You handled the topic quite well.First, I need to see that man who stood with his wife against the nosy sister. I need to give him a jar of icy cold Folere. Way to go bro! You are very right when you say women are their worst enemies. The man is always vindicated while fingers often point at fellow women. We need to be more supportive, thoughtful and mindful of each other. Again that male bashing feminism thing is a clear case of “two wrongs don’t make it right.” The problems women… Read more »

Always you my dear sis Precious thank you very much. That broda really deserves that jar of icy cold folere! May our name change from woe to wisdom indeed. Thanks for adding your voice here. I really appreciate the love and support.

Woman thou art thy worst enemy! Great write up Arrey, I enjoyed reading.

Thank you dear Kewan. Happy to see you here. Please do come again.