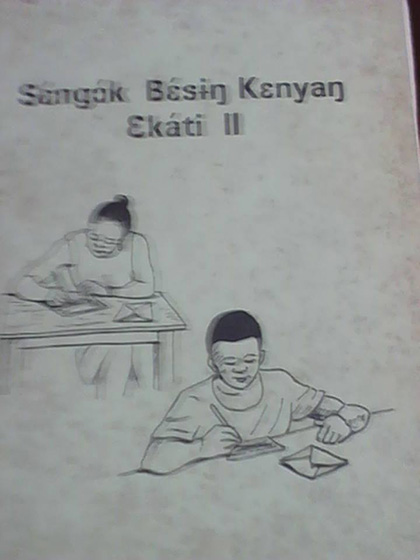 I don’t know if  I got the lyrics right but I do know that anyone who is reading this and schooled in the Anglophone section especially in the South West Region must have heard a song like this or something similar particularly during such occasions like the Youth Day when human investment is promoted and people are expected to bring out their best in what they love about their culture.

Culture is our identity without which we feel lost in a fast moving and global village like our world today. Small wonder that people who leave home for parts unknown always do everything to keep their culture.

Nevertheless, in a bid to fit in an ever changing world which seems to suck more from outsiders than give in return, maintaining this culture is a task in itself and it takes commitment and dedication to be able to keep the cultural identity be in food, dressing or dialect.

Dialect is one aspect of our culture I will focus on today. Born to parents from the Banyangi lands, Kenyang being the mother tongue is one of about several hundreds of dialects spoken in Cameroon and was our first language and what a beautiful language it is. Unfortunately, many who learnt their mother tongue  seem to discard it in favour of colonial languages of English and French. It seems like we are more proud of our colonial  heritage than the vintage heritage left to us by our ancestors. Some of these children grow up never being able to speak the mother tongue and in those rare occasions that they visit the village, they always feel lost. Some take it upon themselves after this to learn the dialect or anything that could give them an identity, that sense of belonging while others shrug it off and get regrets in later life.

It is a good thing to be able to communicate fluently in all the major languages of the world today. It is however, even more better if your dialect serves as the cherry on the cake in this linguistic conquest of yours. I love the kenyang dialect and while I may have forgotten some few words over the years because of the lack of speakers around me, I enjoy it so much the times I can actually communicate in it. The richness,  the sultry and musical sounds are soothing to the soul.  It reminds me of my identity, of something that adds to the whole of who I am and in which I can stand tall and proud of in the swarm of humanity today. Even if I were to suffer a culture shock as a result of being exposed to globalisation, my dialect will always remind me of where I come from and why I should be proud. Yes, time is flying,is flying away. Who will join me in promoting our rich cultural heritage ? Stay tuned.

I speak Akosse( the language of the Bakossis) and this surprises a lot of people,maybe because I often come across as being too westernised, or due to the fact that I teach and research English. The language of a people carries their values and their world view. A lot of our cultural wealth can only find expression in our own mother-tongues. So, I even think that our mother-tongue should be used in more official and institutionalised spaces like hospitals, courtrooms and schools. Well…. Our national languages need champions like you Arrey, so ride on…

Thank you Sis Maureen. No matter how much of the English and French or any other language we may speak, we get more pride in speaking our mother tongue and one wonders alot at the surpises some display with educated ones speak the mother tongue and yes I am with you on that score of making them more institutionalised. Its going to be an interesting ride!

I thought I had lost the skill.

I am looking for a book like this to teach my little nieces and nephews and one with stories too.

Any ideas on where i cna find it?

Funny I only saw this now.
Sorry about that. Pastor Maurice Tarh of Mamfe is a likely place to start. Yuppi we all stilll have the skills, just buried down.