I was visiting with my friend recently and she talked about what was stressing her out so much. I chatted with another friend today and her stress issues were the same. Last week, I chatted with my sister and she decried what all my career friends are crying about. That cry is louder now with back to school.

There is a crises brewing nationwide. From the town of the seven hills to the coastal plains and Savanah grasslands; to the slopes of the majestic Mount Fako, a serious crisis is brewing and career women are caught in the thick of it.

Year in, year out, it is the same story, a never ending circle. The same cry which has the capacity to increase the Stress-O-Metre of many a career woman.

The domestic worker scarcity is fast becoming a crisis.

In the past, while our mothers worked the farms or scaled the markets, many of us need not worry about who took care of us. There was always an aunty, or a neighbour to keep an eye on us.

Times have changed. A village raising a child is fast becoming a thing of the past as many struggle to make ends meet.

What though are some causes for these domestic workers crises?  Why are many of them running away? There are quite a lot of reasons but I will focus on those I know could be contributing factors to these and  the increased rise of temperature on this stress-o-metre of career women.

Many of these workers face a lot of maltreatment at the hands of their mistresses.  They work long hours. In addition, many are poorly fed and if they are live-in workers, they work round the clock and sometimes sleep on the floor, 24h/7.  It is the number one reason why most domestic workers run away from their jobs.

It can be sexual or emotional and verbal. Sexual is mostly attributed to men but there are instances whereby, women have sexually abused their domestic workers especially if they are young virile men. Nevertheless, the rate of sexual abuse by the men of the house is alarming. Some are raped or are continuously abused until they get pregnant and then they get dumped like garbage.

Sexual abuse is closely followed by emotional abuse. Despite what they do, for some mistresses, there is no pleasing them. They find reasons to find faults where none exists, raining abuses and insults on such until they run away.

Both parties are guilty here. Sometimes, the workers look for better paying jobs and leave the employment before their expected contract expires. Looking at this, it is hard to blame such because, many employers breach contracts too. They make promises which are hardly kept.  For example, the usual line is after two years or so, they have to either send their workers to school or put them to be apprentices to learn any trade of their choice. Sadly, not many employers respect this contract and follow through. Many manipulate their workers until they are either forced to labour in vain or leave without seeing a dime of their money. 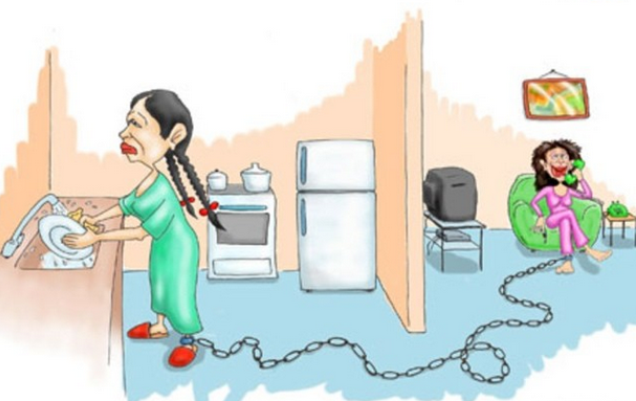 THE LURE OF ‘BUSH FALLING’

While the thrill of travelling abroad is waning in some circles, many domestic workers are finding it the ultimate goal to one day travel abroad. They give up any chances of making it here; grasp the first opportunity that comes by and travel abroad by all means possible. Despite the horror stories of domestic workers in other countries, most of these workers have become suddenly mute to any warnings given to them by well wishers. To them, these well wishers are enemies of progress who, do not want them too to board ‘oroplanes’ and fly the skies. And of course, they cannot see nor hear for themselves as they are more interested in watching Nigerian movies and Tele evangelizers.

The list can go on and infinitum but these; to the best of my knowledge, are some of the most pressing causes of the scarcity of domestic workers. Gone are the days where many were treated like members of the families they worked for. Still, sometimes, no matter how well they are treated, some still maltreat the kids under their care, make away with the family gold and compete with the madam of the house. The irony is that the few people who treat their workers well are caught in the tangle of this stress-o-metre. Times have changed and more and more domestic workers are getting bold; which is a good thing. The sad part is many do not understand they now have bargain powers and can call the shots. Many of these women are desperate and they are even ready to pay any reasonable  amount demanded yet, the workers are leaving in droves and the women are always back to square one, juggling work, house, kids you name it.

Of course, I can hear some people say why don’t these career women leave their jobs altogether?  Sometimes, they can but they also have passions to fulfil. Other times, they just cannot especially if, they are the ones bringing in the hefty pay cheque the family depend on.

What we really need now to find a solution to this problem is to put in place an institution and by laws that carter for the needs and working conditions of these workers. This makes sure they are well paid and well taken care of. There are talks that something like that already exists in Yaoundé. If that is the case, I applaud this bold step and hope it gains ground. Until then, I can only empathize with decent fair minded employers caught in the tangle of this stress-o-metre of domestic workers crises because of the actions of the majority. It is truly a cause for concern.

I love the choice of subject matter and the play of words. I also highly recommend the setting up of domestic workers’ syndicate like it is done in some European countries; with rules, regulations and laws carefully written down and enforced. However, my fear as a true Cameroonian is that some body will always take advantage of the situation, and you can’t beat them in the game.
Thumps up to you Ma Arrey!

Thank you Grand Frere for stopping by. Your fear is valid but we can not always let fear hamper us. There will always be at least one person to do the job well. We have to start from some where.

It’s all about treating people fairly. When domestic a help is hired to take care of kids and then transformed to human robot that takes care of every tasks including servicing patron, something’s got to give at some point. This nonsense about sending them to apprenticeship after 2 years service gives rise to expoitation- pay them a salary. If you are afriad they’ll spend it all as soon as youpay them, put it into a credit union account or something. Show them the proceeds of their labor not some pie-in-the sky promise.

Solid point there on the salary issue, Grand Frere. Reason why many today prefer coming to work daily rather than live-in. In that way, they are sure of their monthly salaries. Pie-in-the- sky promise for real. LOL
Thnak you for stopping by and the great contribution.

My mother told me that back in the day, it was easy to get a good domestic helper. All you needed to do was visit a ‘bush market’ and find an innocent-looking girl and beckon on her. She will get the consent of her family and follow you back to ‘city’ and assist you domestically while you in turn improved on her life and economic status. It is no longer that easy today. Many vices have contributed to the flip. Besides, the number of uneducated girls lying idle in villages has greatly dropped. I think the creation of more day… Read more »

Thank you Sis, for always stopping by. That is another interesting angle you highlighted. It was way better back in the day because many of these mistresses took proper care of their workers. Reason why many stayed until marriage. Yes increased in literacy is also a contributing factor. Creating day care centres is also a good idea especially if they are kid friendly and not only out to make money.

The facts are mostly singularly narrated. Domestic workers are just like everyone else with dreams and ambitions, that must never be overlooked. No one goes into an employment without aspirations to better themselves so why do mistress and masters expect their servants to be loyal when they can’t keep their end of the deal? A well researched union styled syndicate is needed to remedy the problem and it would serve to have a proper contract. We must improve standards to get better services.

Million Dollar question Grand Frere. Everyone aspires growth and to prevent your workers to jump off the ship, sometimes landing in shark infested waters, be fair and honest to them. Motivate and encourage them not see them only as robots to do all the work for you. Granted there are many who do all these and bonds are formed. But just like kids will leave the nest someday, mistresses need to understand their workers also have lives out of their homes to live. Thank you for the contributions.

LOL Sis Delphine, Career has become the passport to the land of laziness for some people. However, there are still people who juggle house and office work. All they need is someone to maybe care for their kids as you said while they are away at the office. Domestic help is a form of employment. The unfortunate thing is that many don’t see it that way and instead treat their workers like slaves. Many fail to keep to the contract, maltreat their helps until they are forced to run away without a pin after years of slaving away and bearing… Read more »

Hiya very nice site!! Guy .. Beautiful .. Superb ..
I will bookmark your site and take the feeds also? I am happy to find numerous helpful information here within the put up, we
need develop extra strategies in this regard, thank you for sharing.
. . . . .