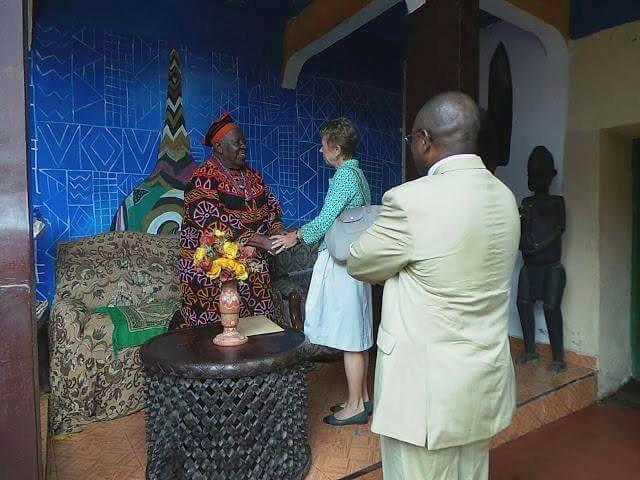 Not too long ago, face book was buzzing with pictures of the Fon of Mankon, HRH Angwafor III. The picture raised a lot of eyebrows. Was it because he too decided to join this number one social networking site?

Apparently or better still, not in the way we might think.

His picture was making the rounds for obviously different reasons. In the picture that was circulating, he was shown to offer what has become an infamous handshake to the French Ambassador to Cameroon visiting his fondom. Another seeming violation of tradition was said to have happened in the West  Region by same ambassador.

I am sure everyone reading this is wondering why a simple gesture as a handshake could cause such uproar. Well, one of the traditions of the people of the North West Region is that the Fon is forbidden to shake hands with anybody. It is difficult to pinpoint exactly why such a tradition is put in place. However, pundits hold that it all stems from superstition and fear of the unknown. Fear that someone with evil intent may harm the fon through black magic with a simple handshake.

How true this is everyone’s guess. The fact however,remains that it is taboo for any fon to shake hands with people. This belief is widespread in the North West Region and some tribes in the Lebialem Division of the South West Region. Everyone must prostrate themselves before the fon as a customary way of greeting.

Being the custodian of all the traditions and someone the people place akin to a god, the fon is equally expected to be the one to uphold such traditions. His standing and extending not only one but both hands to the visiting French ambassador was seen as a kind of sacrilege.

And thus the questions started coming out.

Was the fon being overly polite?

Was it time to do away with this particular tradition? If so why did he choose a foreign dignitary to set the pace?

Why did the ambassador not follow the same rules like every other person or was she exempted by virtue of her skin colour?

A lot of unanswered questions with some people bearing grudges against the fon for ‘selling’ his people short yet again in front of a white man.

As we move with changing trends, it is a given that some traditions will have to give way or find a balance with modernity. Nevertheless, the way it is all done will determine the readiness with which the people embrace this change to what has been a long held cultural belief and identity.

The debate may have died in some circles but in others; it is still raging on, which brings us back to our topic: Was the Infamous handshake an aspect of tradition giving way to modernity? Or is it another facet of our rulers and representatives discarding what we hold dear and selling us short again and again?

Your Comments inspire me. Please read and drop a line, thank you.
(Pic credits published with permission).

Connect with
I allow to create an account
When you login first time using a Social Login button, we collect your account public profile information shared by Social Login provider, based on your privacy settings. We also get your email address to automatically create an account for you in our website. Once your account is created, you'll be logged-in to this account.
DisagreeAgree
2
2
0
3

I remember sometime around 2009 on a trip to Nigeria, I met with a young fon, in the company of guys all travelling as well. For the sake of being polite, I extended a hand in salutation but was declined when it to the turn of the traditional ruler. They told me he was a fon and is not suppose to shake hands. Not to slam the norms of the people he so rightly represent, the man wasn’t dressed in any regalia, wasn’t carrying a staff, apparently has left his palace and go about his business to a foreign country.… Read more »

Bertrand, thank you very much for stopping by again. It is always great getting your viewpoints. To be sure, when these Fons and other traditional rulers step out of their palaces, they are just ordinary people. However, I have seen instances where the same Fon was treated like he was in his palace by his people in the town he was visiting.Maybe the young Fon wasn’t too attached to all the traditional blah blah. But that handshake issue was clearly spelt out to you.You have a point that they respect the traditions when it suits them because even in their… Read more »

Haha! It seems that rule of fons not shaking hands looses its potency when some dignitaries are involved. Years ago when the president visited Bamenda, the fons did not hesitate to shake hands with him and that got people talking. See how Fon Angwafor is all smiles as he hands the forgettable handshake…

I tell you my sister them di just suffer ordinary villagers with all these dos and don’ts. Who no go smile for touch oyebo ee hand 🙂
The thing is if they impose something like tradition, they should equally uphold it. Thank you dear. Always great to see your presence here.