{jcomments on}It was one of those hectic days. Mr John just wanted to dash home have some warm food and a few relaxing moments in front of the TV watching his favourite program before calling it a day. Everything went as planned and just as the program neared the climax, as if by some unseen agreement, pitch blackness engulfed the house.

Elsewhere, Miss Mary just got up from a nap went straight to her desk; she made herself comfortable to start revising for her next G.C.E. paper. She switched on the lights and as soon as she got busy, another unseen agreement it seems, the house is plunged into darkness.

(comic depiction of an unknown person’s view of the situation) 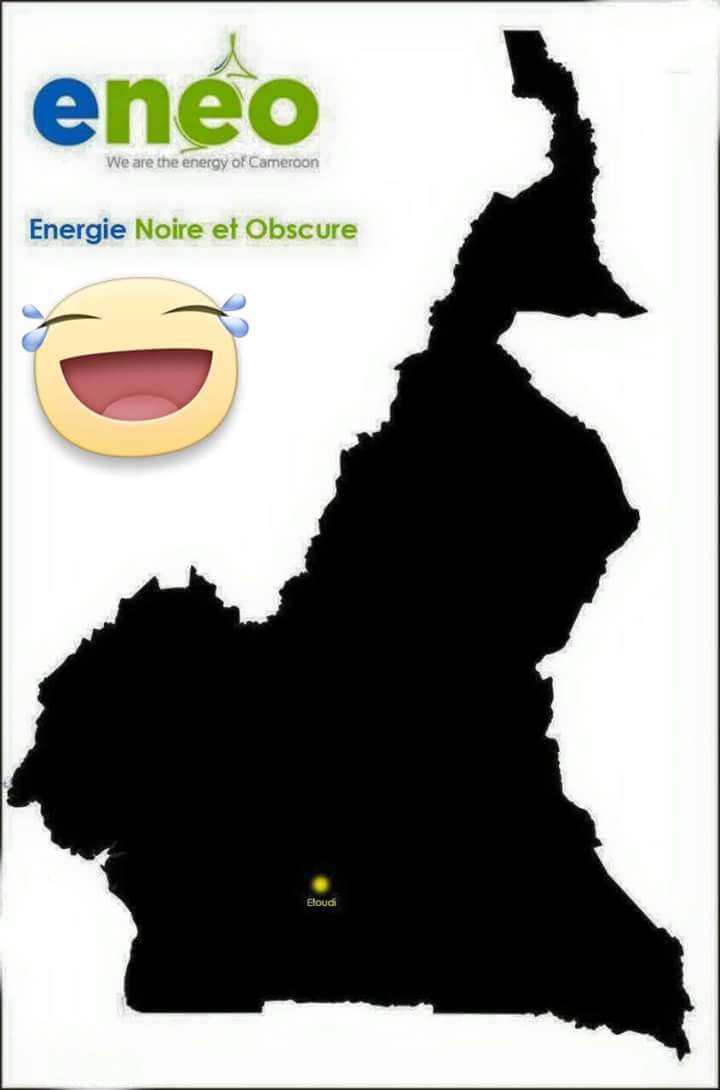 Frustrated sighs follow, accompanied by a resigned acceptance of the situation. Candle, Flash lights or any other light source takes over. Such is the scenario of what has been happening in this triangular Africa in Miniature for the past couple of months. Citizens are constantly being deprived of some of life’s basic necessities.

When the electricity company changed hands yet again from AES Sonel to ENEO last year, Many Cameroonians breathed a sigh of relieve. Everyone was hopeful ENEO would be the one to deliver, the one to free us from the throngs of continuous engulfing darkness (es) and spur us forward to the anticipated emerging country by 2035 we hear preached daily.

As the months show, it appeared like the sigh of relieve was way too premature. The sighs of frustration continue to be heard throughout the national territory. ENEO’s performance all these while leaves much to be desired. One cannot help but feel like we moved from the frying pan into the deepest fire. ENEO sits like the king of the electrical realm, dishing out power outages ever which way without as much as a by your leave. Lives come to a standstill, businesses suffer loss, domestic food stuffs preserved in freezers get bad, the list goes on and on.

In places like Douala, people live with unbearable heat and there is dread thinking of how someone’s life in an emergency operating room can hang perilously in the balance because of these sudden and often unannounced power outages.  While in some localities, people go days upon end with no light. Sometimes I can’t help but wonder if somehow our energy is being exportedto other countries leaving us with inadequate supplies to provoke the persistent power cuts? Electrical supply gets rationed like food during states of emergencies and wartime.  Lights off during the day, lights off during the night, lights off throughout the week! A very ironic situation considering how blessed the country is with energy sources which can be developed to alleviate this problem. It is fast becoming a situation where people eagerly anticipate that moment they could actually have power supply throughout the day meanwhile return of lights is greeted with jubilant shouts like when the prodigal son returned home. Yet, the bills accumulate; sometimes people have to chase bills at supply points or risk paying penalties for unpaid bills they never received.

ENEO sits on its throne, swirling its sceptre like the king it perceives itself to be. One can be tempted to think the NEO is a reminder and extension of an oppressive and painful colonial past we dare not forget. Still, the cries of the frustrated masses continue to fall on deaf ears and darkness continues to plague them.

Which brings me to an argument I have had with friends; many claim Cameroonians are unable to manage their affairs and I have always held the view that unless we stop generalising and give someone the benefit of the doubt, we can never know just how capable one person in the masses would turn out to be. Foreign companies have been managing our energy since after privatisation and if the frustrated sighs of the common man is anything to go by, they are not doing any better in fact they have proved to be a social nuisance we would be better off without.